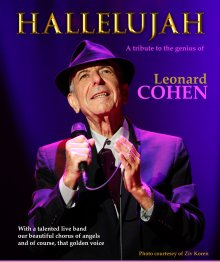 Hallelujah: A Tribute To Leonard Cohen

The Genuis of Leonard Cohen is unquestionable. After the award winning Canadian poet turned to songwriting in the early 60s Leonard wrote that well known song Hallelujah…now acknowledged as one of the great anthems covered by over 300 artists, including Bob Dylan!

Cohens final tour in 2013 took him to 31 countries selling over 4 Million tickets. By now a cult figure, Leonard was widely praised as not just a gifted poet, but a Buddhist priest and perhaps even a prophet!

Including So Long Marianne, Suzanne, The Future, Everybody Knows this 8 piece tribute band is a sincere and even sublime show, with great musicians, a chorus of beautiful angels and of course, that golden voice.

Book Now View all times of this performances